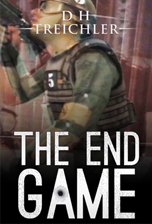 The EndGame and a Global Debate

In The EndGame FBI Agent, Jim Carr, is the hunter who becomes the hunted. And in Jim’s case, he is selected by some very nasty fellows as their prey: The Mexican Zeta Cartel. His comfortable life is thrown into chaos when Lexie, the love of his life, is killed on a mission he leads. Because of the mission’s success he becomes infamous in the Bureau, but at the same time he has lost what is most important to him.

Secretary of State Hillary Clinton presents President Obama with a set of equally unattractive policy alternatives in Mexico. The president decides to establish an interagency task force to address the problems in Mexico. Alene Oliviera, a rising star in the Department of Justice, is chosen to lead it and remembers Jim’s valor. She repays a debt by recommending him to become Ops Director. But there is a deadly catch Jim must work through. Once on the job, Jim finds himself in a cat and mouse game on both sides of the border. With the stakes rising, Jim must navigate amongst the conflicting objectives he is handed, increasing cartel attacks against him, his growing affections for Alene, and his personal quest to find his father, kidnapped by the cartel.

"President Nixon started it all in June of 1971. He funded efforts intended to take most drugs off the streets of America. The result is hundreds of billions spent and yet illegal drugs remain readily available throughout the country."

Jim initiates a series of actions that puts him on the ground with the Zetas. As a result, he is given an opportunity, with Alene, to make a profound recommendation to President Obama. The question is will the president use his executive powers to change the nature of the game, or continue the no win scenario? The president makes his decision, leading Jim into a series of confrontations that decides all of his quests. The only question is whether his past enables his success or that of the cartels? The war south of the border is a war Americans tend to ignore. The war against drug violence. But what is the nature of this war? President Nixon started it all in June of 1971. He funded efforts intended to take most drugs off the streets of America. The result is hundreds of billions spent and yet illegal drugs remain readily available throughout the country. As a result we also have more people incarcerated than any other nation per capita. So we spend more money to maintain drug offenders in prison than any other nation, but have the same or greater illegal drug availability than when we started this ‘war’.

We also have more people, whose voting rights have been revoked because of minor drug offenses, than any other nation. What does this say about America’s commitment to rights and freedoms? With this novel, the author hopes to stimulate a nationwide debate about the total cost of the war on drugs. In the US we see dealers sentenced to prison, but we know they are a small minority of those engaged in the trade. The reality is that the cartels have crossed the US border. They increasingly engage in the full range of criminal activities here that limit our freedoms the way they have limited freedoms in Mexico. We as a nation must decide whether we want to change our approach. We can deprive the cartels of the money they make through our illegal markets. Similarly, with our increasing domestic oil and gas production we are significantly reducing the oil cartel’s ability to fund global Jihad from the revenues of Americans filling their gas tanks at any cost.

The illegal US market for drugs is what makes the Mexican cartels so powerful they can ignore any laws. Is it not better to legalize and regulate drugs in America? Tax them and use the revenue to provide help to those who cannot function as a result of their abuse and dependence? Regulate the drugs so users know what they are buying. Put responsibility for our behaviors back with the individual and their families. Remove the drug trade from the shadows and bring it into the open where we can see and deal with it appropriately. Americans have always been a pragmatic people. When presented with rational alternatives, we always select those that benefit the larger community. In the case of the illegal drug trade, with the appropriate action we have an opportunity to do several things: we can restore individual freedoms, reduce the numbers of individuals who cross the line into illegal activity, reduce the cost to incarcerate those who do, and provide the revenues to government to address the abusers who otherwise become a burden to society. As the author, I hope you enjoy the novel, engage in the debate and become a force for change that leads to increased freedoms and assumption of individual responsibility.