What can you say about Alhambra? It is as unexpected as it is magnificent. We arrived by car after an hour’s drive from La Herradura, a small village on the coast an hour east of Malaga, (see companion blog). We were told you need to buy your tickets a month in advance. The crowds are timed and strictly regulated to help preserve the condition of this monument where sections are more than 800 years old. Upon arrival in Spain, we checked the website and they indicated buy your tickets a month in advance to ensure availability. This is apparently the myth proposed by the government to keep the crowds under control. We even checked tours and found there was a single slot open on the day we had available to visit. The tour guide wanted €55 even though the unlimited admission for a self-guided tour is €14 as of this writing. We asked if there are any tickets available if you just show up on the day of the tour you wish to take. The response was that if you arrive by 7:00am on the day you wish to visit, the ticket office opens at 8:00 and you have a pretty good chance of scoring the tickets you want. We arrived at 7:15 after taking a longer route than necessary. Once on site we discovered there are two lines. One for cash purchases and one for credit cards. The credit card line was shorter so we got on line and were able to enter by 8:30. One caution. One member of our party sought to buy tickets using AMEX and was denied. When I offered my VISA, we had no difficulty.

We quickly discovered that the grounds have four main structures: the original Moorish period fortress, a later Moorish castle for Mohammed V, which stole the whole show with intricate carved marble and inlaid wood ceilings, the 16th century castle of Carlos V, Holy Roman Emperor, which has a circular courtyard inside a square block appearing structure, and another home called Generalife, with spectacular gardens, even though they weren’t created until the 1930s. During Carlos V’s reign, these gardens were the orchards next to the fortress and castle.

The entrance to the original castle is an Italian Cypress lined walk. Although this is no ordinary walk. The cypresses have been there so long they are grown together with walkways between into spectacular rose gardens on either side. It reminds you of the hedge maze in Alice in Wonderland. It doesn’t take much to think you hear the Queen of Hearts running amok, commanding “Off with their heads.” 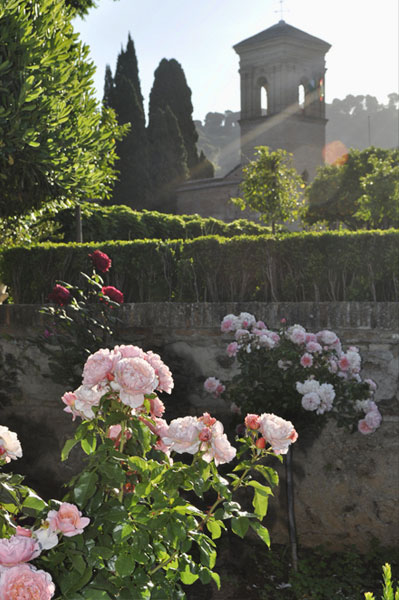 We started our tour after a short potty break in the building next to the Porto del Vino, or port of wines. The original Moorish fortress is on the top of a hill overlooking Granada. The walls are thick as you’d expect from that era. Small windows are inset into the walls to permit firing cross bows and later muskets at anyone wishing to invade the premises. Much of the exterior reveals the changes made in the structure over the centuries. From windows that were cut into the walls and later bricked in to preserve the integrity of the building, to layers of different types and thicknesses of brick, mortared and plastered to hide the repairs from frequent defensive battles. The views from atop the walls show a modern, but densely built out city below. If one looks closely you can see various walls and structures of the original fortress that have been overgrown by construction, homes and shops of the growing mercantile class.

We noticed on our tickets that we were scheduled to tour the Moorish castle at 9:00 am. This is the structure below the Carlos V castle, but adjacent to the Moorish fortress. We hustled over, past our start time, stood in line for a few minutes before we noticed others who came in with us going to the woman controlling the line. She let them in past their start time but before the next group coming in at 9:30. We spent more time in this section than any other. The interior of this castle is simply indescribable. I have toured the world, but never seen anything that compares with the quality and extent of the workmanship on display here. Each succeeding room offered something new. A higher ceiling. More intricate cut and inlaid stone or wood. The extent of the coloration that has disappeared over the centuries is evident in smatterings from room to room. The brief descriptions of both the history of restorations and the actual work that has been done on site simply amaze. While this building is one of the best preserved in the world for that period, it is evident that when completed more than 500 years ago, it was incredible. One can only use their imagination to see it as it was at that time, a sea of sculptured stone, marble and a range of colors including golds, reds, blues, blacks, greens and browns. The ceilings are inlaid wood that mimic the sky. The rooms incorporate reflection pools, fountains of different sizes, shapes and figures. 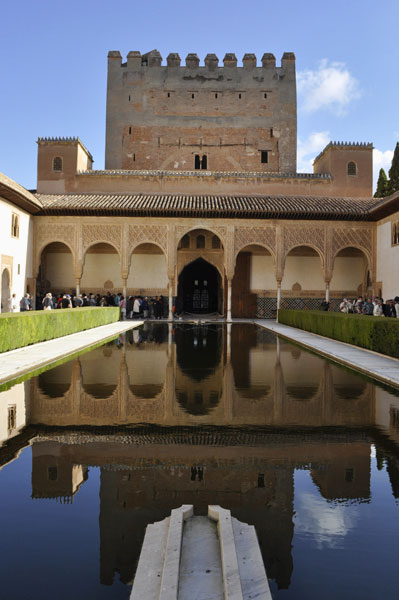 The contrast with the Castle of Carlos V could not be greater. The third major structure looks to be a simple stone edifice from the exterior. Square blocks of brown stone with metallic circles embedded symbolizing the reign of Carlos V, the building is not overly impressive from the exterior. Once inside, one finds a circle inside the square of the exterior. The circular courtyard inside a double decked arcade gives one the impression of the Roman Forum in its height. In contrast to the Moorish Castle, it seems plain and simple. Expensive marbles decorate, but they are dull and drab in comparison. Only two exhibits were available during our visit. One is the Granada Museum of Fine Arts (free to EU country citizens, €1.50 for all others) and the other is free, an exhibit of the family appointed by King Ferdinand and Queen Isabella, yes those Ferdinand and Isabella of Christopher Columbus fame, as Mayor of Alhambra and appointed to maintain the structure, which they successfully did until the early 1800s. The art exhibit contained both paintings and sculptures that are remarkable in their own rights, and the other exhibit has an excellent collection of latter day hand copied books and early printed books from the 16th century.

The last structure, Generalife was an interesting add on to the castles and fortress. It is mostly an elaborate garden, again framed by closely grown cypresses, both hiding and revealing gardens on each side of the main walk way. These gardens continue the rose collection and also highlight sweet smelling juniper and a maze of other plants of wide ranging colors, shapes and applications. The building itself is later day construction. It contains Moorish artifacts, but is clearly on the list of structures to be rehabilitated last.

While we did not stay until evening, completing our tour in about six hours (7 am to 1 pm), the state highlights the evening garden tours under the lights (approximately €7). It was easy to see how such a tour would be incredibly spectacular. But six hours in with a nine hour wait to see the gardens at night just didn’t make sense.

When we completed our tour, we drove into Granada for a light bite to eat. After touring a bit, we missed the main public parking garage, since there was no street parking anywhere we could find. Since we visited on Sunday, we also found that the restaurants were closed along with nearly everything else. So we were relegated to returning to La Herradura, where we were staying to catch a light lunch.