La Herradura is a small (3,500 off-season and 15,000 high-season) Med-side community an hour east of Malaga, Spain. The best way to get there is by train from Madrid to Malaga and rent a car at the Malaga train station. The Back Roads Wanderer found this gem through a mutual friend who’s Ex owns an affordable three bedroom condo hanging off a cliff with just the Med and you from his wide terrace. It is not on most tourist agendas, as I did not see any hotels. While there are several restaurants under construction, there didn’t seem to be much housing going up. This seems to be the exclusive domain of people with condos here who want to get away to their summer place. 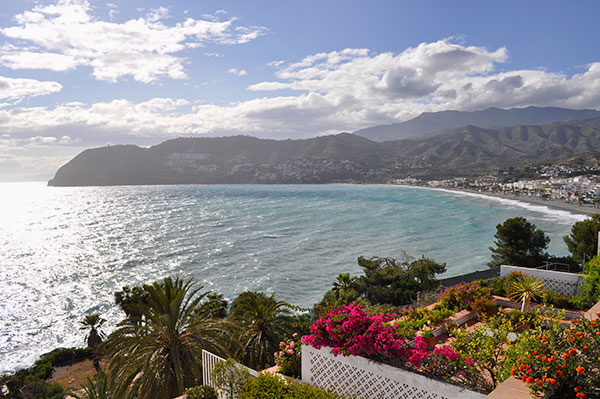 The main attractions to this small community are hang gliding and scuba diving, in addition to just visiting the beaches, which are pebbles, requiring something on your feet to enjoy. (Beaches with great sand are two highway stops away, but draw much denser crowds). And yet the waters are incredible blends of blues and greens that soothe the tensions and stresses that lead you to vacations in the first place.

We visited at the end of May. A great time as the crowds haven’t arrived and yet the days are t-shirt and shorts weather warm. If seafood and Spanish wines are of interest, you’ve come to the right place. On our first night upon the recommendation of a friend who lives in Herradura year round, we dined at Chambao de Vicente, an interesting place at the eastern end of the beach (Paseo Andres Segovia). We were seated at a table fifteen feet from the water as the sun set and shortly thereafter were entertained by flying fish jumping from the dark waters.

The portions are generous by European measures. I had a cassoulet of seafood that contained the densest and most diverse sampling of seafood and crustaceans I’ve experienced anywhere in the world. The wine list was not extensive, but the range of Spanish wines included several that were fabulous with the dish I’d selected including a rare sparkling white cava producer I’d never seen previously.

The rest of our group enjoyed the well prepared paella, swordfish and mixed fish grill as main courses. A very large mixed salad included both fruit and vegetables, enough to have been a meal by itself. Each portion more than satisfied and made dessert difficult, but a challenge we were all up for. And this was the only disappointment of the evening. Frozen ice cream desserts with all the names you would expect from white table cloth restaurants. But after such a superb meal, we were not upset with the final disappointment. In fact, we elected to walk the length of the beach back to our condo to enjoy the moon, calm sea and near perfect evening temperatures. 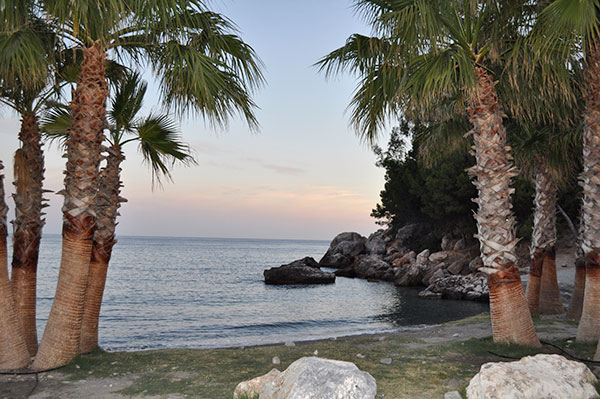 For lunch the next day, we split up and visited different parts of the small village. We went to Bambu, which is a small glass-walled and patio structure on the beach side of the main street (Paseo Andres Segovia). The grilled monkfish was filleted and prepared in a butter and spice sauce. My spouse had eggs, Iberico ham and cheese scrambled with a side of mango and goat cheese. The meal was excellent, although the ham a bit salty. The views of the Med were unparalleled on a windy day where the waves were crashing into the beach. The rest of our party walked up to a small local market where they purchased the usual unusual remembrances, had a light lunch at Pizzeria Venezia at Paseo Andrews Segovia, 9 (Telephone: 958 618 448) and wandered the streets until Siesta, at which time we all returned to the condo about the same time.

The rest of our group went on to visit the San Miguel Castle in Almunecar, a short drive away, which was thought to have originated in the Phoenician era around the 7th century BC. The present structure exhibits influence of the Roman, Moorish and Christian eras of dominance in this region. The British badly damaged the fortifications during the Spanish Civil War, and slowly restorations remain in progress.

After a relaxing afternoon at the condo, absorbing the calming waters of the now blue gray sea, we took the short walk down the main street to find a restaurant, our local host described only as ‘The Sardine’. Its actual name is La Sardina (Paseo Andres Segovia, telephone 958 640 111). It’s a more formal place with modernist décor and more extensive menu and wine list. A more extensive price list as well, although our final bill was not substantially more than the night before. I shared a seafood paella, which had substantially less seafood than the night before, although the sauce on the rice was more flavorful. The beef and swordfish members of our group sampled had good flavor, but were smallish portions and the swordfish was described as ‘dry’. We had a Ribero Del Duero Grenache, which proved to be quite excellent, even though it was a 2012. The highlight of the meal for me was a cheese cake, that was more like a ricotta pie and therefore not frozen. It was by far the best part of the whole night.

On our last full day in La Herradura, our group took off for Granada to visit the Alhambra (see separate blog). Upon our return we visited The Lemon Grass restaurant on Paseo Andres Segovia. This is a sushi restaurant with the usual assortment of sashimis, rolls and non-shushi dishes to entice the non-raw seafood fanciers traveling with those strange creatures who think fish can be like beef, best served raw with a little onion mixed in. We sampled the shrimp, tuna and salmon rolls with a half pot of warm saki. We found the rolls were adequate, although the rice a little rubbery. The wasabi took longer than usual to clear out my sinuses, but maybe I took smaller amounts than usual. The ruling was not the best on the sushi side, but one member of our party had beef tenderloin, which she described as the best meal she’d had since the salad on the first night. Those who sampled her meal to help her finish concurred with her assessment.

We spent the remainder of the day resting up for our next day travels back to the hustle and bustle of a major metropolitan area, (see separate blogs on Barcelona). We caught a few rays of sun, although the temperatures and light winds made it difficult to remain scantily clad for long, although more than a few braved the pebble beaches and even waded into the Med to replenish their souls. 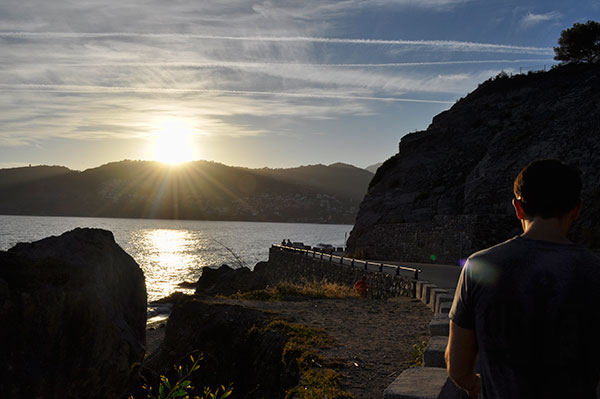