While in Madrid, we changed our itinerary at breakfast on our second day. Rather than spending most of the day at the Prado Museum, which most of our party had visited previously, we chose to take a day trip down to Toledo. It is only a 38 minute train ride (cost about 20) from the lower level of the Madrid Atocha station. (The upper level is the major cities, but apparently Toledo is considered a suburb and thus the trains depart from a different set of tracks). Despite all our bad experiences with buying train tickets, we braved the machines and since we were simply buying same day tickets, not part of the Spain Pass, and to local destinations we had no issue. We were not able to get on the next departure but we only waited about an hour for available seats.

The train was on time and we quickly found ourselves arriving at Toledo. Cabs are available at the train station to take you up into the city, but we chose to walk it. This is a warning: It takes a lot of stairs to make it up into the main part of the city, but time wise it only took us about 20 minutes to find ourselves on the main square. Coming across the footbridge into the lower levels of the city also gives you some perspective about how invaders found the city and why it changed rules so few times.

Toledo was a northern capital of Moorish Spain for about 270 years, but Muslims, Christians and Jewish populations all lived in relative harmony during this period. In fact there are still Islamist services at the main cathedral in this city every week. The main attraction here is shopping for armor, swords, knives and representations of antiquities from the middle ages. The other is the cathedral, which is the second largest in Spain according to a Spanish friend who lives in Madrid. (Tickets are available across from the main entrance with headsets in multiple languages for self-guided tours).It is also home to one of the largest collections of El Greco paintings in the world. In fact, El Greco produced paintings just for this cathedral which are on display. A walk through the gallery shows the influence El Greco had on other painters in this city who were to follow him. Another interesting feature is a display of paintings of every Bishop of Toledo from the first, a short time after the death of Christ to the present. In the main cathedral itself, is an amazing collection of sculpture, iron and wood work. For example, the choir seats in the first row have carved scenes that depict wars fought by the rulers of Toledo. One of the sculptures in the area where the mass is performed is of a shepherd who helped win an important battle for the ruler of Toledo who is approximately the same size but above and further from the worshippers who observe this area.

Near the entrance to the Cathedral’s art collection is an incredible sculpture. It simply has to be observed and described in the audio tour to be understood and appreciated. 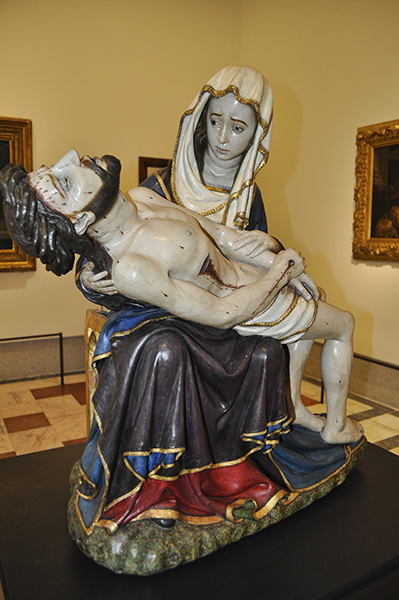 Takeaways: Toledo was and is a community that tolerates and accepts the religious beliefs of the many different populations who have chosen to live there over the years. This acceptance is seen not only in this massive cathedral, but in the wares sold in the shops and the foods served in the restaurants. As a member of our party put it, one can still see how this city was under the various rulers who came and conquered it, but always found a way to incorporate the beliefs and needs of those who lived here during their reigns. Toledo is one of those places that you have to visit at least once to appreciate all this was and remains here. It is a vibrant city that has lessons of tolerance and acceptance to share with us all.