Urban Explorations: Thinking of the Train in Spain? Read This First!

As an experienced rail traveler in Europe, I thought I had the system down. But Spain is an exception to every other experience I’ve had. First a friend told us there are two train stations in Madrid and that we needed to go to Estacio Madrid d’Atocha to travel to other major cities. Saved us from going to the wrong place to start.

Next, they have a great deal. It’s called the Spain Pass on Renfe. You can buy a 30 day pass to ride the intercity trains anywhere in Spain for up to 30 days. At least that’s what they told us when we bought our tickets in Madrid, after a 30 minute wait in line and four trips to the information station to scope it out before we got to the window. We paid about $200 for the Pass and thought it a great deal because we intended to take the train from Madrid to Sevilla, then Malaga, followed by Barcelona and finally back to Madrid. Essentially we thought we would travel for about half of the cost of individual tickets.


Now for the bad news.

The first thing you need to know is in some train stations you must take a number when you come in before you get in line. Of the four stations we used two required it to even talk with you and two did not: Malaga and Barcelona did, Madrid and Sevilla did not. Where required, if you don’t have a number they won’t serve you until you show up at the proper window at the time they call you. And you need to make sure the number you have is for the service you wish. Buy tickets today with one number code, tickets in advance is another. The screen will come up in Spanish and if you don’t read it, then look to the left side of the screen for the language you do read. The screen will change to your language and tell you which button to push to get the kind of ticket you are buying. 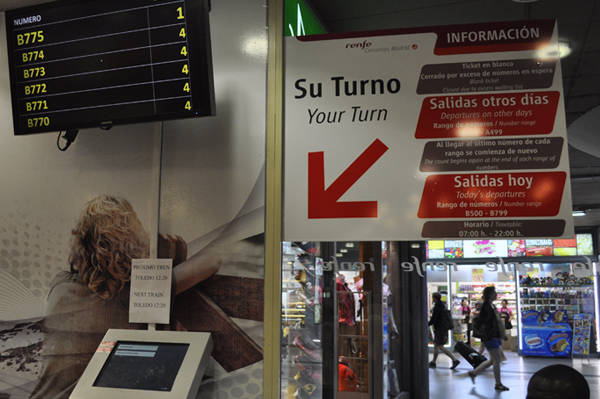 Number Machine with Display of Number Being Served

That’s all well and fine. But the trains in Spain are often sold out in advance. We traveled from Madrid to Sevilla and on to Malaga with no incidents. In fact in Sevilla, we got into two different lines and the first one to reach a window was where we made our reservation and got our seat assignments. When we reached Malaga, we thought we would be smart and obtain our reservation and seat assignments under the Spain Pass when we arrived. We went to a window (without a number and were told to go get one). When we got back to the window the agent told us there were only two direct trains on our next travel day, the time of departure and both were sold out. The agent told me to check with the information counter. I went to that person, and even though there was no on in line, he refused to speak to me until I got a number for the information window. When I got back to him, he told me there was a train to Madrid that could get me there in time to catch another to Barcelona. He gave me the departure time and connection departure time. Back to the number machine and wait only a few minutes for the next available agent. This agent was very helpful since I had the right number, all my Spain Passes and the times of the trains from the information desk needed. However, it wasn’t so simple. Even though the two agents sat next to each other, the times they had for the trains were different. After much discussion we discovered there was only one connection that worked and we got the last four seats on the Malaga to Madrid train. Problem solved, or so I thought.

When we arrived at the station to travel to Barcelona through Madrid I thought it best to get the reservation and seat assignments from Barcelona to Madrid, even thought they were three days out. I got my number and was told at the window they could not help me and to go to information desk, another number, and I was told they could not confirm a reservation and seats for a segment that did not originate in that city. I was sent to a Renfe office to talk to someone and that person affirmed they could not help me in Malaga and could not even give me the times of the trains from Barcelona to Madrid. Mistake number two. I may have been successful if I’d asked for the reservations and seat assignments when I got the Malaga to Madrid to Barcelona segments, because it all started in Malaga, but I was unable to test that theory.

The train ride to Madrid was uneventful, there was even a movie in Spanish that killed two of the three hours and the connection was about 40 minutes. Perfect timing to get off one train, go through the whole station with our baggage, exit, and reenter, re-X-ray, go to the window, check in and find a place for our luggage on the train. Three hours and four stops later we pulled into Barcelona five minutes early, this time after a Tom Cruise Mission Impossible movie, in Spanish, with almost no plot, but lots of action scenes which worked fine in Spanish.

When we arrived in Barcelona, we arrived at 2030 hours (8:30 pm). We went to the windows for non-same day tickets and were told they could not help us. I needed to go to a machine and someone would be there to help me. Went to the machine, entered my rail pass number and got an error message. Went to the information window and was told someone usually was at the machines to help. But that person went home at 2000 hours (8:00 pm). So I should come back between 10 am and 8 pm and someone would be able to help us. 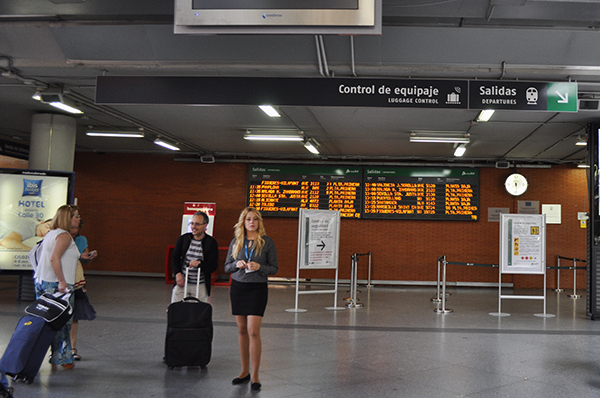 Now we are talking about a train ride between the two largest cities in Spain. They have trains about every 90 minutes. We decided that since things had not gone smoothly we would go to the train station the day before our travel date. We got there at 11:30, went to the next day window and was told to get my number and wait my turn. Oops. First mistake. I immediately checked the number over his window. Number E024. I went to the machine and took my number: E155. When we got our number there were two windows open. An hour and a half later there were seven windows open, but they had only been open for a few minutes when our lucky number finally came up.

In the hour and a half of our wait, we visited every shop and walked around the terminal more than a dozen times. A woman was at the ticket machines and we asked if she could help us with tickets on the Spain Pass. She said no, I needed to go to the next day sales window. She didn’t say anything about needing a number, so she was obviously not helping us really. We decided to stay in the future day ticket sales area once they got to number E140 just so we would not miss our turn with a ticket agent. And we had to watch carefully because there were both E numbers and T numbers, with T numbers representing people who were buying tickets at a particular time of day and not the next train at the windows next to our area.

When we got to the window we found out just how special the Spain Pass is. When we bought the pass the agent asked us how many trips we planned to take. We told her four: Madrid to Sevilla; Sevilla to Malaga; Malaga to Barcelona and Barcelona to Madrid. What we didn’t know is she put the number of legs on our ticket: four. When the Malaga to Barcelona trains were all sold out they used two of our legs to get us from Malaga to Barcelona. So now we had to buy one way tickets to Madrid, because our passes were all used up even though they were supposed to be good for a month. They are good, actually for six months, but only for the number of legs you purchased. So another hundred dollars per person were added to our rail fares to get us to Madrid, on the only train with any seats available and they were only first class. So as the day went on it only got better and better.

If you buy your tickets in Spain, the Spain Pass on Renfe is a great deal for the price.

However, you need to know what times and what days you wish to travel and you should get reservations and seat assignments for all segments when you buy the pass, if possible.

If you need to change anything, make sure you get to the train station early and check to see if you need to take a number before you get in line and only go to a window when your number is called. Also make sure you are going to the right window for what you need. If you have any questions, get a number for the information window first and go ask all your questions there.

If you don’t care about saving money and want ultimate flexibility buy your tickets from the machines. But expect your same day travel will be possibly held over until the next day.

So don’t travel by train in Spain, unless you buy in advance, or don’t have a pressing need to be anywhere you want because you are traveling at their convenience and not yours.